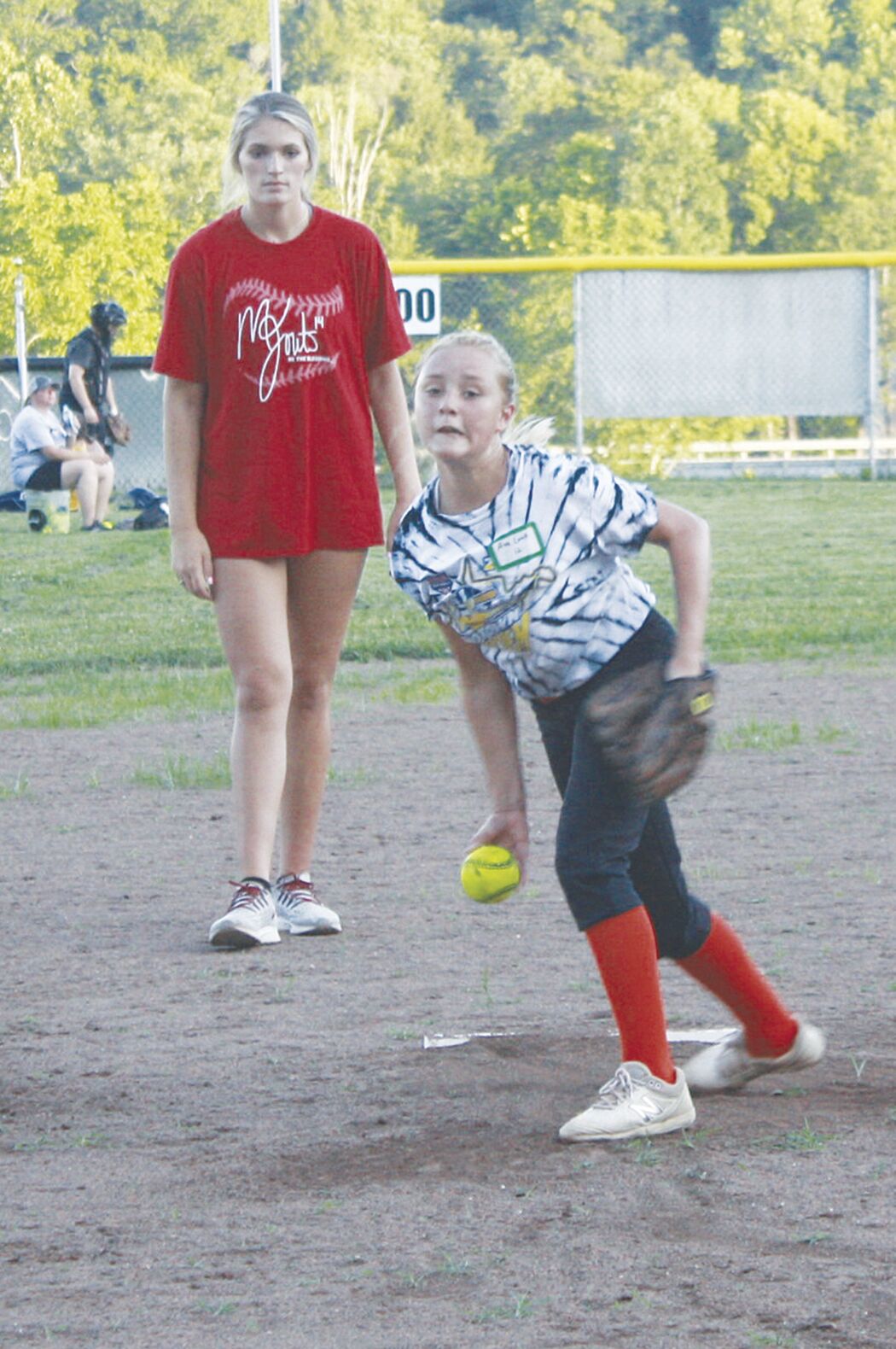 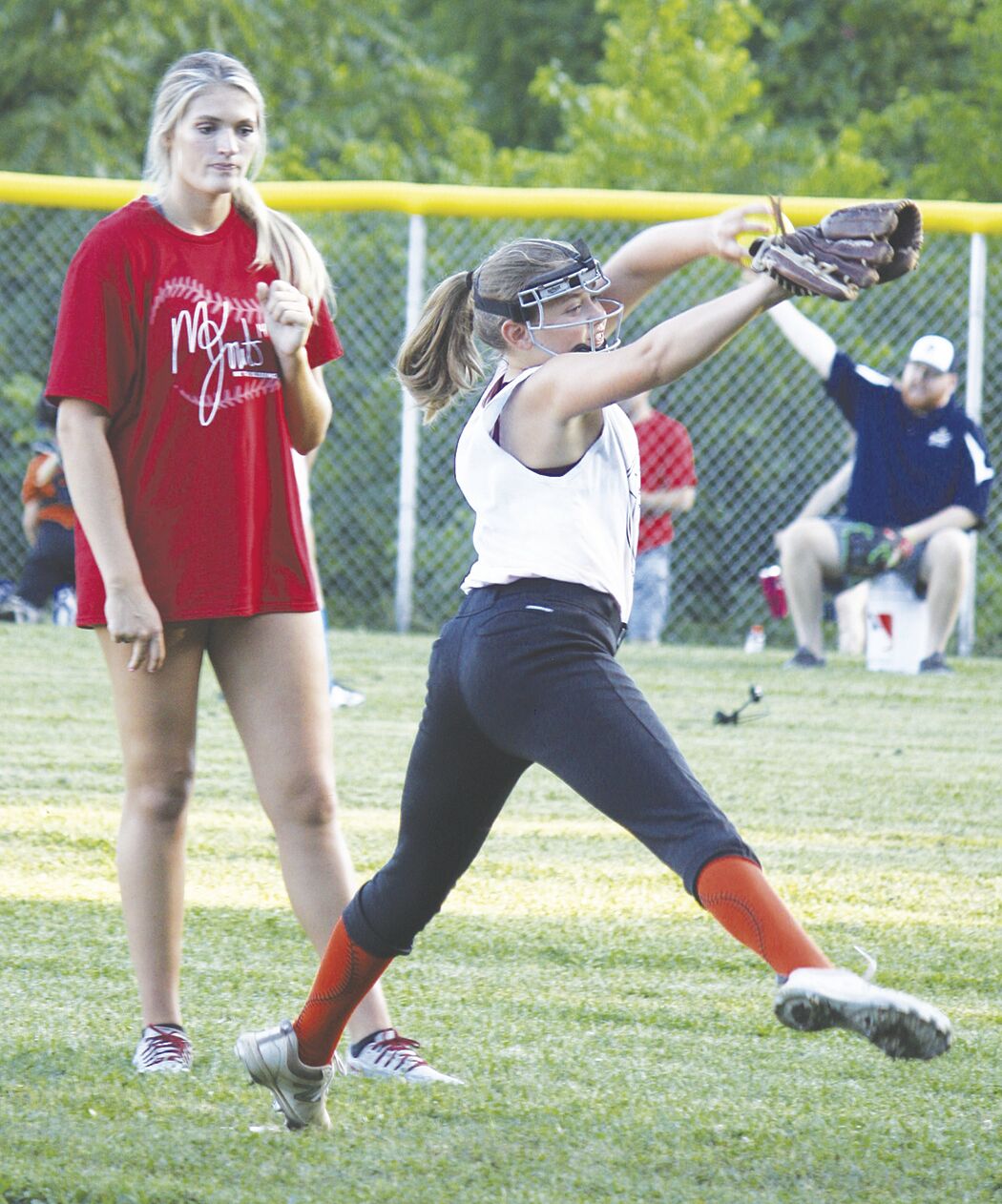 UA pitcher Montana Fouts (left) watches the form of a camp participant during Monday night’s clinic.  A total of 56 girls, plus their catchers, were in attendance to learn more about the correct way to pitch softball. 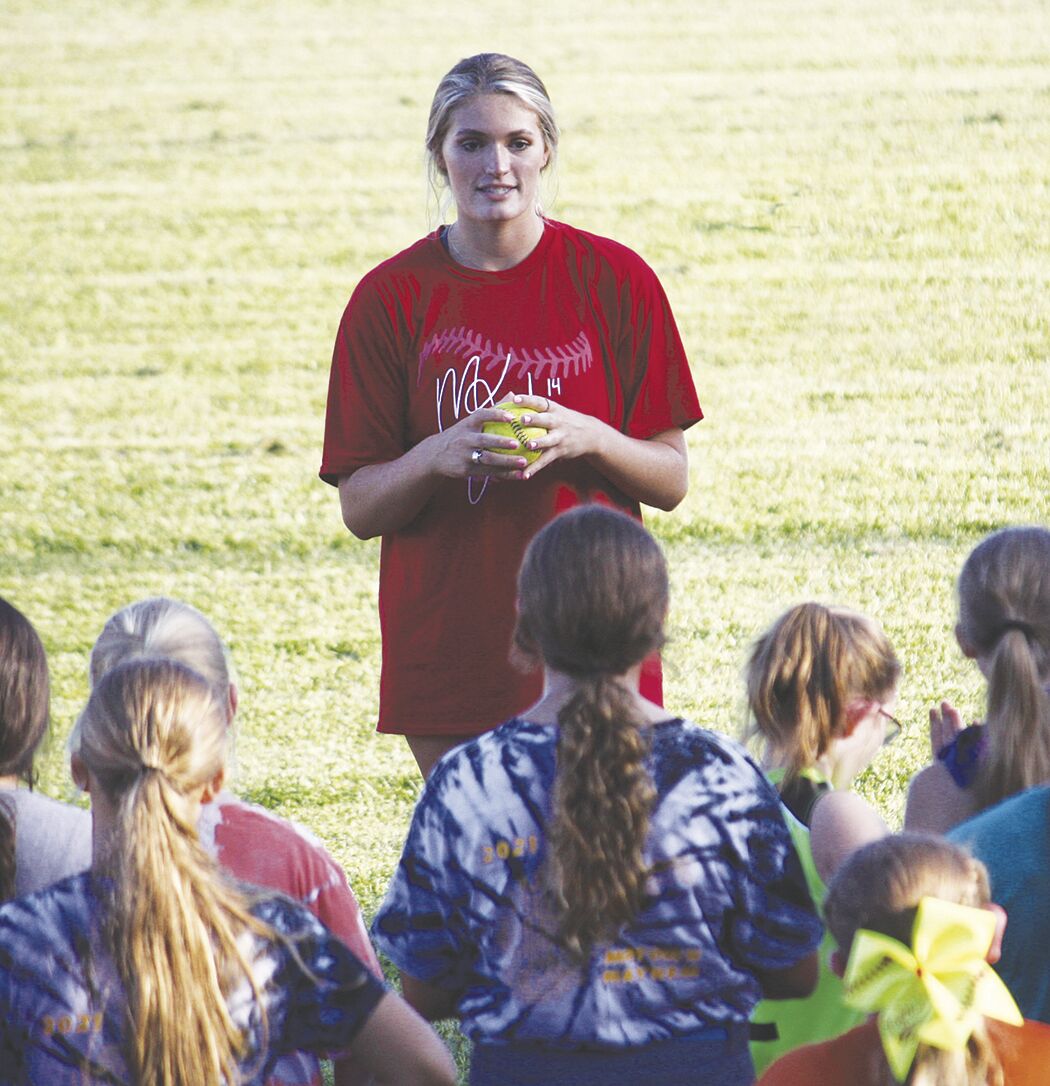 Montana Fouts, pitcher for the University of Alabama softball team, speaks to girls who attended a two-day camp last week in Ritchie County.

University of Alabama Athletics
1 of 3

UA pitcher Montana Fouts (left) watches the form of a camp participant during Monday night’s clinic.  A total of 56 girls, plus their catchers, were in attendance to learn more about the correct way to pitch softball.

Montana Fouts, pitcher for the University of Alabama softball team, speaks to girls who attended a two-day camp last week in Ritchie County.

ELLENBORO, W.Va. – What little girl doesn’t dream of the future? What will she be when she grows up? Maybe possibly one day playing sports, or in this case, softball?

Some may start at a young age and work through the mini-ball, ponytail, middle and high school levels. Others who show exceptional talent may be asked to continue and have a college career.

One of those girls, who knew as a youngster that she loved the game, is Montana Fouts.

If you don’t know the name, then you are not a follower of college softball.

Fouts serves as a pitcher for the Alabama Crimson Tide and participated in the 2021 Women’s College World Series. Her most memorable game of that competition occurred when she marked an incredible milestone in the event against UCLA, pitching a perfect game versus a team that Alabama had never beaten there until then.  She faced 21 batters on that night, retiring all 21 – which also happened to be her 21st birthday.

With that being said, Fouts came to Ritchie County and conducted a two-day clinic, July 12-13, for 56 interested participants who wanted to learn more on the correct way to become a softball pitcher.

Applicants signed up quickly for a chance to be instructed by Fouts in a once-in-a-lifetime opportunity.

So, on that Monday and Tuesday, the Alabama standout gave her full attention to each and every participant at Lady Rebel Field in Ellenboro.

She is willing to give back to the community and she wants to help other young girls who also envision being the next great pitcher.

“I love to give lessons and I love to teach," Fouts said when asked how she first began hosting camps. "I enjoy myself doing it, practicing and going through that to see success, and even more I enjoy seeing other people succeed.  It began with lessons. Me and my dad started when I was a junior or senior in high school. I loved giving them since then, and it keeps growing from that.”

Her aim is to make sure the girls learn the proper form and also have fun doing so.

She admits the sport is competitive. The biggest lesson she feels she can teach is that when learning new things, there will be struggles; however, you learn from those struggles and grow in understanding.

Fouts’ dad, Tim, and Budge Elliott, of Ellenboro’s Hilltop Academy, met at an all-star game, and Budge made arrangements for use of the Lady Rebel softball field to conduct the camp.

“I’m really thankful to be able to use the field here and it’s great that everyone came out to learn," Fouts said. "Hopefully, I can teach them something to take back to work on. I’m grateful that God and everyone else allowed me the opportunity to do this."

Fouts is a family person and her father has been with her every step of the way.

How did she get to the platform at Alabama?

Born in Charleston, Fouts and family moved to Grayson, Kentucky, 10 years later and she attended East Carter High School before attending at Alabama. She committed to the Crimson Tide during her freshman year of high school and is cited as the youngest player the Tide had ever offered.

She didn’t see a lot of varsity time in 6th-grade, but she became a full-time varsity player the next year, and rewrote the Kentucky softball record book daily after that.

The coach at the time stated, “Nerves didn’t get to her [when] pitching kids that were five, six or seven years older than her. She didn’t get rattled easy.”

She has many accomplishments to her name.

In the 2021 season, she led the NCAA with 349 strikeouts, starting 32 games and throwing double-digit strikeouts in 22 of them.

Fouts was named the NFCA Pitcher of the Year, SEC Co-Pitcher of the Year and SEC Tournament MVP this past year. In her time with the Tide, she has also been named a two-time NFCA All-American, first-team All-South Region, and SEC Freshman of the Year.

The community appreciates Fouts for making a local stop and providing those in attendance a chance to cultivate their love of the game.