For $35 (that's less than $3 a month!) you can have full access to our website, the e-edition and daily content. If you would like both a print and online subscription, you can purchase our Silver Package.

$35.00 for 365 days
Get Started
You have permission to edit this article.
Edit 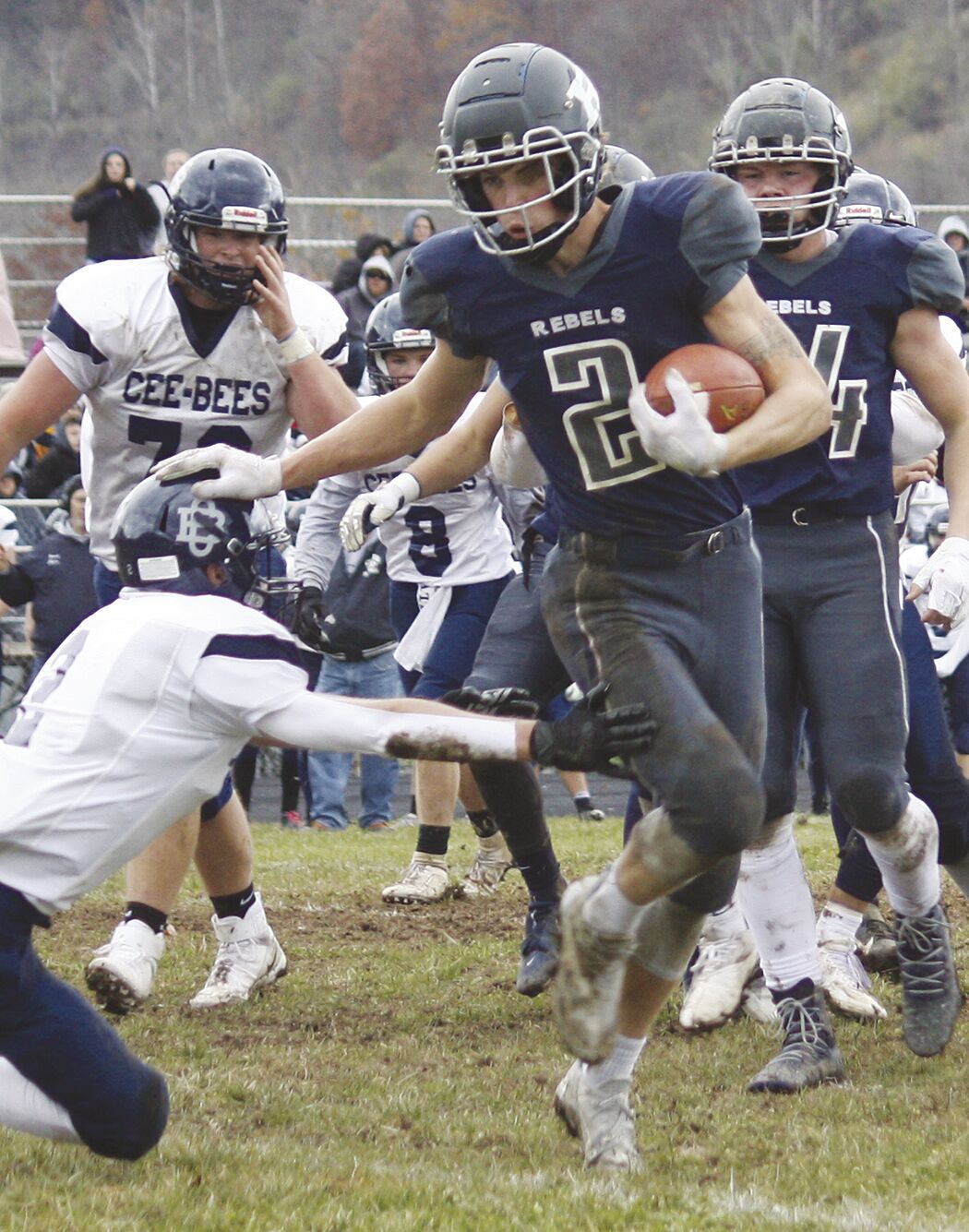 Gus Morrison avoids the Cee-Bee tackle on his way to a Ritchie County six.  The senior had 300 all-purpose yards in Saturday’s first-round playoff game. 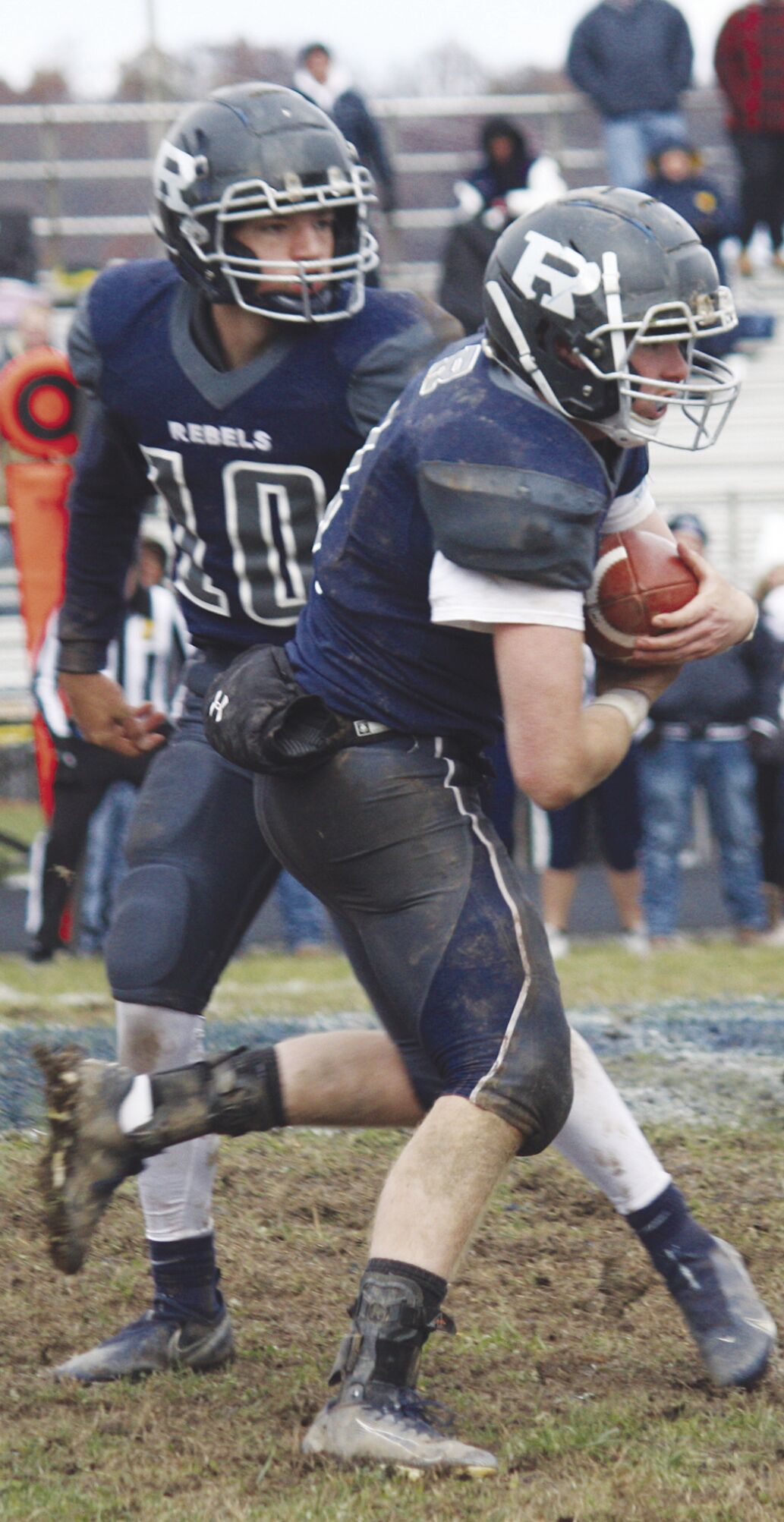 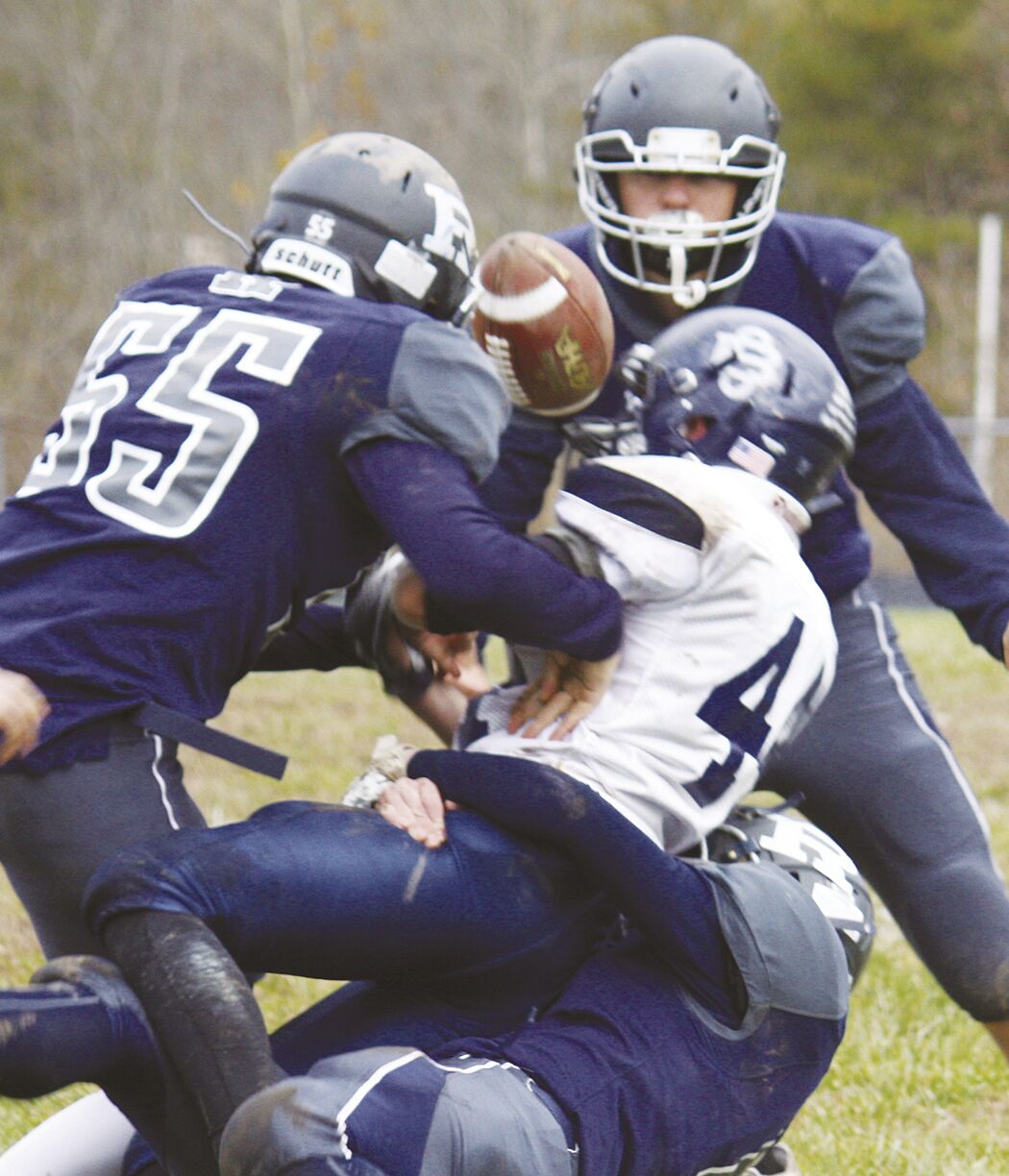 Cole Waugaman (#55) and a host of Rebel defenders strip the football from the Clay-Battelle running back in the second half.

Gus Morrison avoids the Cee-Bee tackle on his way to a Ritchie County six.  The senior had 300 all-purpose yards in Saturday’s first-round playoff game.

Cole Waugaman (#55) and a host of Rebel defenders strip the football from the Clay-Battelle running back in the second half.

ELLENBORO, W.Va. — The Rebels took advantage of visiting Clay-Battelle in the first round of the Class A playoffs, scoring three first-quarter touchdowns and never trailing, as they  downed the Cee-Bees, 46-14.

This marked the fourth consecutive year the fourth-ranked Rebels reached postseason play and they wasted little time in letting No. 13 Clay-Battelle know who the better team was that day.

“I was pleased with the defensive performance by holding Clay-Battelle to under 50 yards rushing for the game and winning the turnover battle,” said RCHS coach Rick Haught.

The Cee-Bees elected to receive the opening kickoff, but were never able to get through the Ritchie County defensive line, setting the fourth-down boot. The punter slipped in the muddy conditions and had to fall on the football, provided excellent field position for the Rebels, starting on Clay-Battelle's 15-yard line.  Using three snaps, Marlon Moore was on the receiving end of an Ethan Haught 9-yard pass for the touchdown. Austin Bartlett added the pair for an 8-0 lead.

Ryan Wilson's Cee-Bees continued to struggle on offense, surrendering once more to Ritchie County, and the Rebels wasted no time in securing their next score. Gus Morrison found a large opening for major yardage, Brandon Riddle gained another 20 and Morrison completed the drive on a 7-yard run to pay dirt.  Morrison also punched the extra points on the board, upping the Rebel total to 14-0.

The third TD came with under a minute remaining in the initial quarter and Morrison’s number was called again for the 15-yard rushing score.  He was used once more for the 2-point conversion and Ritchie County was up 24-0.

Clay-Battelle quickly responded when quick-footed Carson Shriver grabbed the kick off and returned it 84 yards to the end zone. A good kick made it 24-7 in favor of the Rebels after the 12-minute frame.

The Cee-Bees appeared to have a good drive going prior to intermission, but Morgan Knight stripped the ball to stop that advancement.

The teams each had a pair of possessions in the second quarter; however, the scoreboard remained unchanged at halftime.

Ritchie County made good use of its lead-off offensive opportunity in the third quarter.  Three plays resulted in three first downs, marching to the C-B 30-yard line. Facing second down and seven from the 15, Haught traipsed the distance for another Rebel touchdown. He then found Bartlett open for the two, widening the margin over Clay-Battelle, 32-7.

With eight ticks left in the third, Haught scurried 12 yards for Ritchie County’s last score of the stanza. Morrison did his thing and made the 2-point conversion a success, sending the Rebels ahead 40-7.

An aerial from C-B quarterback Drew Boczek to Johnny Arnett, and good boot, supplied Clay-Battelle with seven to start the fourth and the Cee-Bees appeared to be ready to make another attempt; however, Riddle intercepted the throw and stopped that progress.

Morrison accepted both handoffs and tallied Ritchie County’s final touchdown of the contest midway through the ending period. The kick was blocked, with the board reflecting 46-14 in favor of the Rebels, where it stood as time expired.

In the pocket, Haught was 5-for-8 for 42 yards. Marlon Moore had a reception for 15 yards, in addition to Morrison’s contribution.

“The ground attack for over 300 yards was very effective with Gus, Brandon and Ethan all having big runs," Rick Haught said. "With field conditions, it was very important to get out to the early lead, but we gave them life when we allowed the kickoff return after we scored our third touchdown."

Defensive honors also went to Morrison, who registered 11 total tackles in the game. Garrett Cunningham came in for seven stops and Knight, five. Moore offered three tackles for a loss including two sacks.

Knight and William Dawson were credited with fumble recoveries, and Riddle, an interception.

“Moore played his best of the season on the defensive side of the ball,” Haught said.

The playoff field was sliced in half after last weekend, as eight teams were dropped from each class. Four of the eight remaining Class A competitors are Little Kanawha Conference teams.

Several upsets were recorded, including the No. 1 teams in both double and single A.

“We get an opportunity to have a rematch with a Mount View team which Ritchie County played in its first playoff game three years ago in Princeton," Haught said. "The Rebels played well that night, but could not pull out the win. We plan to get off to a good start again this week."