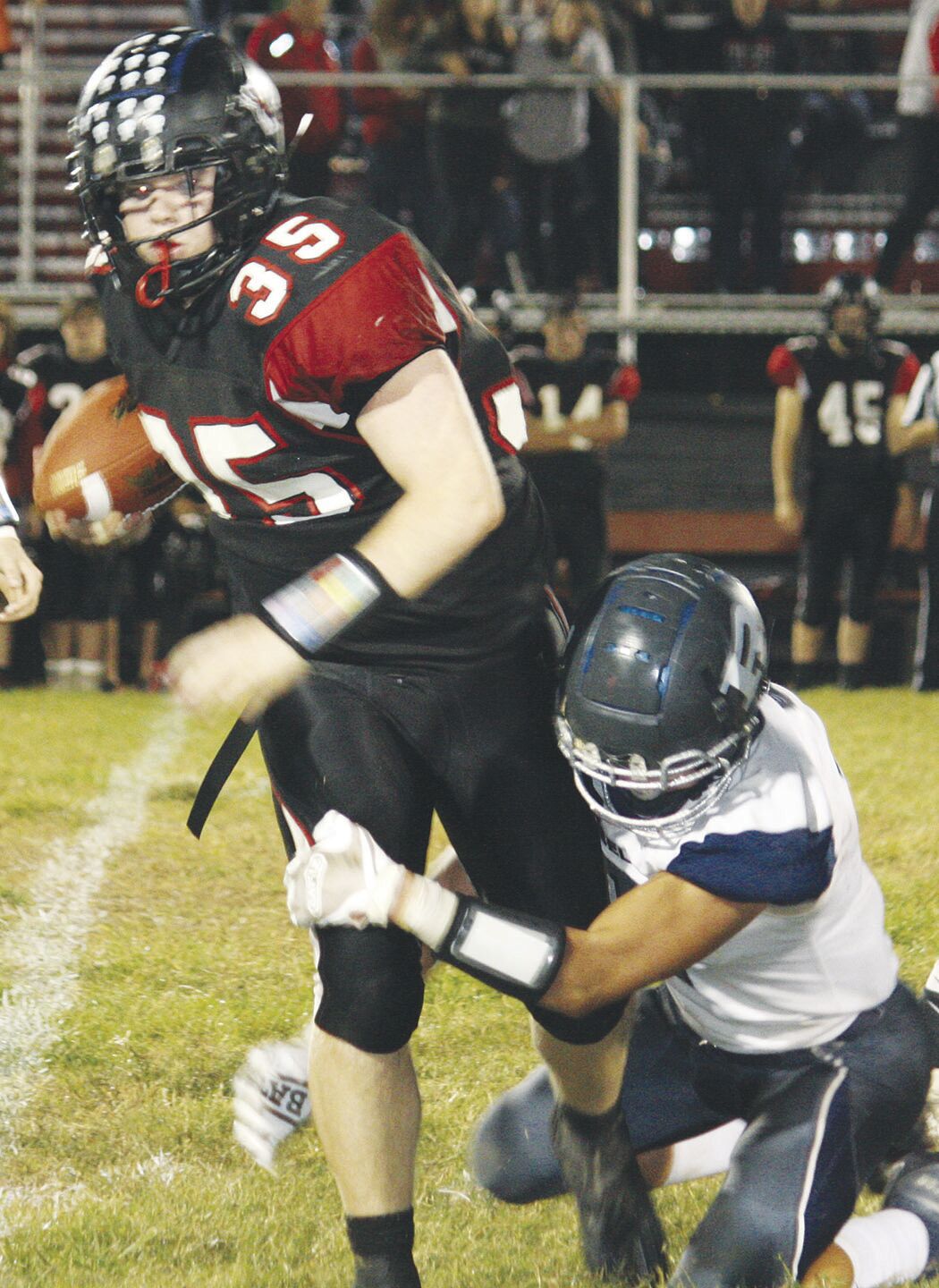 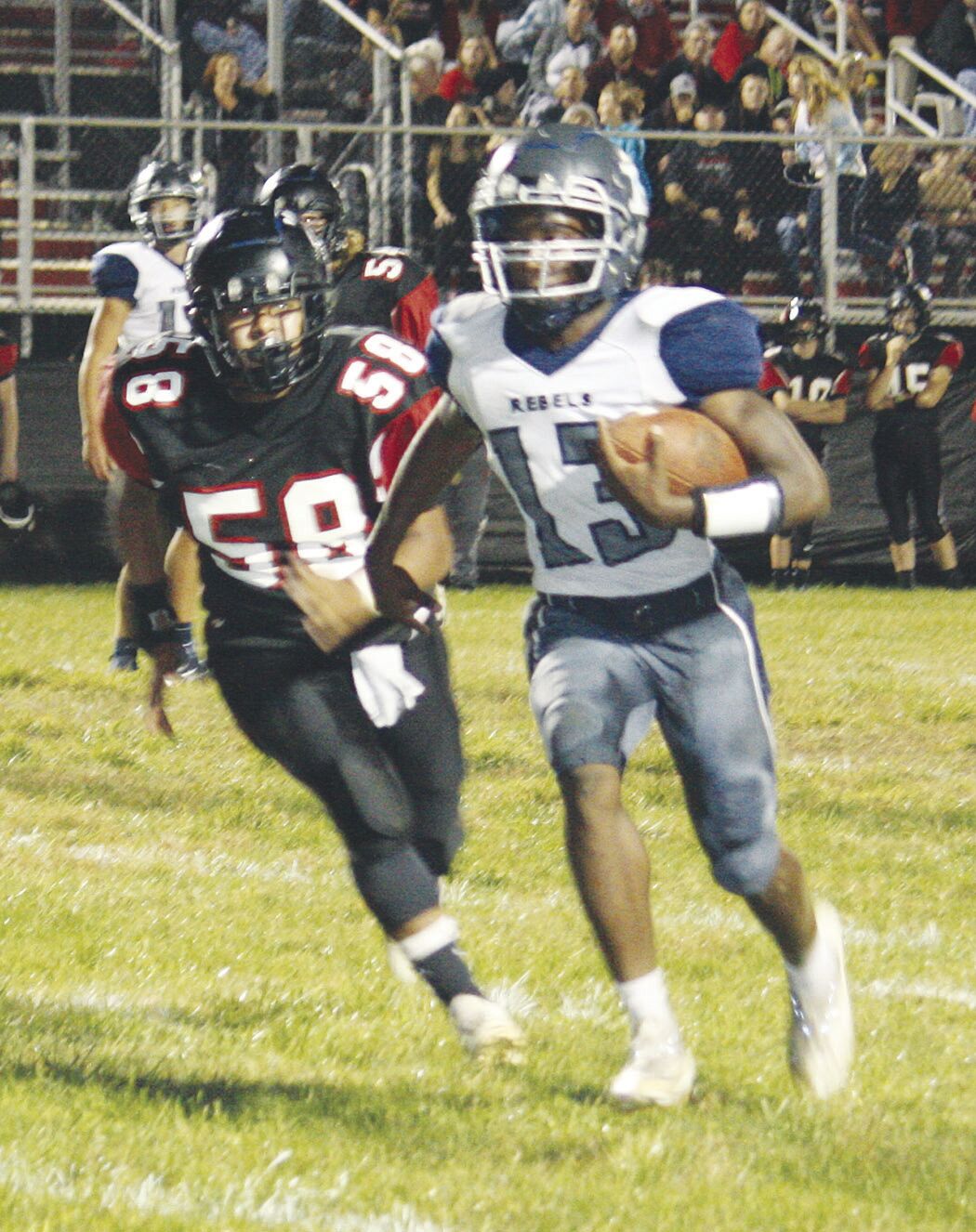 Marlon Moore races down the field for a Rebel touchdown, as a Ravenswood defender chases after him.

Marlon Moore races down the field for a Rebel touchdown, as a Ravenswood defender chases after him.

RAVENSWOOD, W.Va. – After a heartbreaker in West Union, Ritchie County was able to rebound Oct. 1 with a 53-28 Little Kanawha Conference victory against Ravenswood, upping its season record to 4-1.

The Red Devils were stymied early and never recovered, spoiling their homecoming contest to the sixth-ranked Rebels.

“Special teams played very well all the way around,” said coach Rick Haught.  “It generated two touchdowns – 1one a recovered block punt in the end zone, and another on a heads-up play, picking up a short punt and taking it into the end zone.”

Ravenswood drew the opening kickoff, but was unable to make any progress, as the team was forced backwards and had to relinquish possession.

The Rebels then used four plays to reach pay dirt on a 1-yard run by Brandon Riddle and from there, the Blue and Gray tallied two additional touchdowns in the first quarter.

As the Red Devils were pressured to punt again from their 9-yard line, the kick went nowhere and Riddle grabbed the pigskin and jaunted 6 yards to score.  Seth Hardy furnished the 2-point conversion and Ritchie County set at 14-0 just midway through the frame.

The Rebels started on the Devils' 14 when they gained control on the subsequent series and Marlon Moore clipped off 6 yards for the score.

Ravenswood finally broke loose on a 34-yard run by Isaiah Casto with seconds remaining and the extra-point boot made the score 20-7 in favor of the Rebels.

Ritchie County’s lead-off touchdown in the second quarter occurred as Austin Bartlett blocked a Red Devils' punt deep in their own territory and he proceeded to run into the end zone. Riddle was successful on the extra pair and the Rebels were up 28-7.

A 5-yard pass from Ethan Haught to Bartlett lit up the scoreboard again for Ritchie County at the 5:29 mark of the second, giving the Rebels a comfortable 34-7 advantage.

The squads exchanged touchdowns on the next offensive attempts.

Ravenswood saw a 17-yard run from Casto and the Rebels followed on a 15-yard executed play by Moore to close the half, with Ritchie County on top, 40-14.

Beginning the third, the Rebels suffered a fumble, albeit they quickly regained possession as Haught got in the line of fire and picked up an interception. Nine plays later, Bodhi Utter went 10 yards to score. That would be the only points of the stanza.

Ritchie County began the fourth by cashing in on a Hardy 1-yard run across the goal line and the PAT by Aiden Sellers went through the uprights, furnishing the Rebels a 53-14 margin with 7:49 left on the clock.

The Red Devils established two long rushing plays for touchdowns late, although the deficit was too large to overcome in the end.

“The Rebels had a solid win over Ravenswood," coach Haught said. "The offense played very well, as we were able to throw and run the ball well.  It was also good that we were able to get everyone some playing time that evening.  I was pleased so many players participated in the victory."

Ethan Haught completed half of his passes for the night, going 5-10 for 78 yards.

Bartlett pulled in a trio of receptions for 60 yards, and Moore and Garrett Cunningham went 9 yards on individual catches.

On defense, Bartlett provided 13 tackles (10 solo) and eight for losses in the game. Further, Kolton DePinho stuffed the Red Devils five times for losses and DePinho and Bartlett had two sacks.

Midway through the season, the Rebels next visit South Harrison Oct. 8